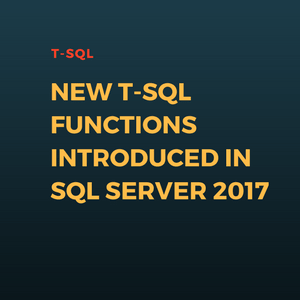 There are four new T-SQL functions introduced in SQL Server 2017. These are very useful that make SQL Server developers life easier. Let’s have a look at each one of these SQL 2017 new  functions with their examples and use cases.

The output of above command will look like below details.

As I said above, this function skips the null values. You can see this by running below command on your SQL Server 2017 instance.

Output of above command will be:

You can see null values have been skipped in above output.

Here, you need to give three inputs. Input string is first argument that we want to modify with some changes. Second Argument is characters that is an expression of any character type containing characters that should be replaced. Third argument is an expression that will replace second argument mentioned in Inputstring. Make sure that the length and type of characters and translations will be same otherwise you will end up with errors. The output will be same as given in input string if you pass NULL value in any of the second or third argument.

Below is the example of this function.

Here we are replacing a square bracket having comma with regular bracket and blank space in place of comma.   Output of above T-SQL will be given below.

You can see square bracket has been replaced with the given one and comma separator is also removed from above expression. If you want to revert it of you want to enter comma or any separator with changing the give brackets you can also get this done using this function.

Output of above command will look like below information.

Another example of this function is given below. Run below t-sql command if you want to replace few to the brackets with the given in transactions argument.

The output of above command will be look like below info.

This function has enabled users to remove the space characters or other characters from the start or end of the string. Earlier we used to do the same thing using LTRIM(RTRIM(@string)) T-SQL command.

Below example will remove the free spaces given before and after the word techyaz.

We can the output of above t-sql function given as:

Earlier we used to do the same thing using below t-sql command.

Many developers were expected this function to be part of SQL Server since long time. Now their wish have been completed in SQL Server 2017. STRING_AGG is going to become very popular among all new functions. This function concatenates the values of string expressions and places separator values between them. The separator is not added at the end of string.

STRING_AGG is an aggregate function that takes all expressions from rows and concatenates them into a single string. Here is the example where we will see output from a table in a given format.

You can see all column values are showing a single string in each row. Another aspect of this function is given in below example.

Suppose, you have a database having information about your blog or published articles. There are separate tables to save articles and their tags. Now, developers want to return one row per each article with all associated tags. We can use below query to get the output.

Output of above command will look like below details.

Follow me:
Manvendra Deo Singh
I am working as a Technical Architect in one of the top IT consulting firm. I have expertise on all versions of SQL Server since SQL Server 2000. I have lead multiple SQL Server projects like consolidation, upgrades, migrations, HA & DR. I love to share my knowledge. You can contact me on my social accounts for any consulting work.